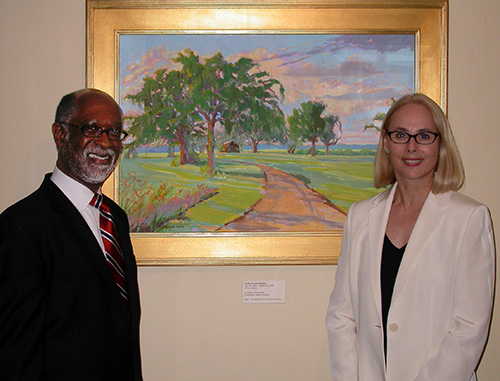 In describing her approach to art, Tjelda vander Meijden quotes Pablo Picasso who stated: "Painting is a blind man’s profession. He paints not what he sees, but what he feels - what he tells himself about what he has seen." Reflecting herself on her work, Tjelda observed that "I try to portray the color of light, which informs the viewer of the spirit of the painting. Color, with its warm and cool hues, is a silent language, which creates form and gives emotional information."

Having traveled the world, in recent years to Iceland; Antarctica; Ushuaia, Argentina; and the High Arctic Islands including, Nunavut, Canada, and Greenland, Tjelda has similarly been moved to portray, in plein air painting and printmaking, her emotions inspired by her experiences. She works from life experiences, and in her studio, to develop from her oil sketches both prints and larger paintings. Under the U.S. Department of State’s "Art in Embassies" program, Tjelda’s works were displayed in the Ambassador’s residence for foreign guests to learn about outstanding American art.

In her Iceland - inspired works on water, Tjelda conveys her perceptions of the power, the mystery, and the omnipresence of water amid our transient lives on our ever-changing planet. Growing up in the Netherlands where living with the challenges of water is an integral part of life, Tjelda developed early a subconscious appreciation and respect for water. Water is as close to us as the composition of the human body and as distant as the farthest reaches of our longest rivers. Tjelda explores water in the context of transformation and impermanence in the transience of our time on Earth, which she describes as "an ever-changing place of refuge and peril." Moreover, she has offered us her lens through which we may feel and understand emotionally in our own ways the creative, destructive, and life-sustaining power of water. 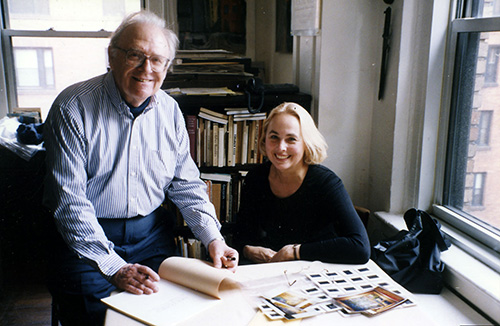 Tjelda vander Meijden studied painting in my class at the National Academy of Design and Fine Arts, in New York City. Tjelda is a highly talented and accomplished painter, printmaker, teacher and lecturer, setting definite goals for her art. It has been said that our Western civilization is based on two traditions - the Greco-Roman tradition of the beauty of the body and on the Judeo-Christian tradition of the beauty of the spirit. This tradition is a search of the truth: spiritual, philosophical, social and artistic. In her work Tjelda strictly follows this tradition. Daughter of a prominent scientist, she was born in New Jersey, but spent her formative years in the Netherlands, a country surrounded by water. Water became a major subject matter in her art. "I have always had a deep respect and understanding of the power of water," says Tjelda vander Meijden in one of her artist’s statements.

One of the major functions of visual arts was and still is to inform, to educate and to highlight the important issues of the present and of the future. Tjelda vander Meijden’s paintings and prints do it in the most convincing way. With the many perils our planet is facing now her work acquires a special importance. She is, we may say, the artist of our time.